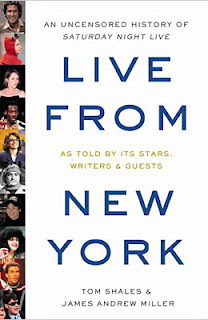 I don't feel like I have a ton to say about Live from New York. It started out as a really great book and finished as an okay book (hence, 3 stars). I'm a pretty big Saturday Night Live fan and I thought that it would be an incredible read but, in the end, it ended up just being okay.

The book basically tells the history of SNL from its inception to about 2001. Interestingly (though only at times), it's told only through interviews. No, really. The whole book is just people talking about the show. Very, very occasionally the author's will add a short note mid chapter to signal a change of subject but other than that, it's all just the actors, writers, producers and hosts talking about the show.

Positives -- The interview format works on some occasions. When they talk about 'inside stuff' or 'gossip' about people and aspects of the show it's very good. (see: parts of the book about Norm McDonald being fired). Interview format also is great when you want to hear what the famous people think of one another and Lorne Michaels (the genius behind the show). This was great, for example, to hear Chevy Chase, Akyrod and Bill Murray talk about one another and others. It's fun to just hear what random hosts have thought about working at SNL. Steve Martin and Alec Baldwin sort of stand out.

Negatives -- Too often the interviews were simply not interesting and, since it's just people talking, not as concise and well thoughtful as the written word. A lot of people interviewed were writers or producers that I've never heard of. Although they were interesting it wasn't as cool as hearing from Tin Fey or Will Ferrell.

Things I learned that I didn't know before:
There's other stuff that I can't remember but that's the type of things you pick up in the book.

Overall, the book is highly recommended to any serious SNL fan. To an avid watcher, it is still probably interesting and to the rare viewer, this book probably is not worth your time.
Posted by droth8um at 7:31 AM