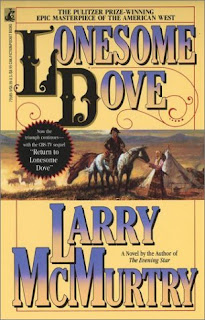 Well, as the winter storm, nice, snow (and thundersnow!) dissipate outside, my mind is in the West after recently finishing Larry McMurtry's classic Lonesome Dove. Like many books I have read, it's been a classic for decades but was new to me. Perhaps more famous for the fantastic miniseries of the same name that was done in the mid-80's, the book is quite good and won the Pulitzer. (On a side note, the mini-series is absolutely fantastic and is probably the best movie adaptation of a book I have ever seen. The characters end up being much as I imagined, and because of the miniseries time allotted, nothing critical from the novel is missed).
Anyway, I am quite proud of myself for finishing as quickly as I did since this book came in at nearly 1,000 pages, I don't like the cowboy genre, and my little 3 month old boy takes up some of the time.

Overall, Lonesome Dove is a very good book. Telling the story of a group of men and a few women (most interesting: the two main characters, who are Texas Rangers), it tells the story of a cattle drive from the city of Lonesome Dove in Texas to Montana. The story is a classic cowboy novel in every sense of the word. It has Indians, gunfights, whores, drinking, etc... all the stuff that you think of when you think of a Western.

Great parts about the book: it's a good story (not great) and it is told nicely, if not straightforward by the author. Perhaps the part I enjoyed the most was the dialogue between people. I thought McMurtry did an incredible job nailing the language of an 19th century cowboy and how they spoke. In fact, whenever there were major chapters without dialogue, I found myself getting restless for the next conversation.

Perhaps the most enjoyable part of the novel, and what pushed it to 4 stars, are the themes of story. The novel has so many wonderful questions about life, love and living that the reader can't help but picture himself as a cowboy on the ride and wonder about the choices that came up and what one would do. If nothing else, I have a full and comprehensive appreciation for the difficulty and vacuousness of life at this time. One second your on a cattle drive, and the next a bullet from an Indian hits you in the leg and your dead. The story really makes its mark by making the reader question the purpose of life at that time and really what love is and how does one define it (is love people or could it be nature? could the love of a friend be more than a woman's? etc). Almost nothing profound is ever specifically said by the characters but their actions and amazingly limited words give you a wonderful glimpse into each of the lives, mind and hearts.

What kept it from getting 5 stars: First, if I am going to invest 1,000 pages you better knock the novel out of the park; this was closer to a double. Second, the ending was not great. The book puts so much emphasis on one event, and because you are only glimpsing at one small part in the life of these characters, it made it impossible to have an ending that answered my biggest question: what happened to all these characters (alas, that will be for me to decide I guess)? Third, and this is really my own issue and won't take away from the novel for the rest of you, but I really don't like nor find interesting the cowboy/Western genre. I have stayed away from this book and all others because I just find that lifestyle boring (to me, in the present; probably not the same view if I lived back then). However, so many people recommend this book and 'loved it' (plus it won the Pulitzer), I felt it was worth the time.

Overall, like I said, it is a very good novel; I am not sure it's great though (hence 4 stars). I do recommend it to any readers with sometime and strongly recommend it to anyone who likes cowboy stuff. Additionally, I would highly recommend watching the miniseries AFTER (I think with most book/movie combos it's better to start with the book because it just makes the experience better usually and it's fun to sound smart and say "oh that movie, it was nothing like the book. The characters were so much more developed and interesting in the book. No way did that move live up to how good the book is"). Anyway, check it out if you like. The characters, dialogue, and story are all very good and you may even learn something about yourself and they way you live from the novel.
Posted by droth8um at 11:59 AM