I might be a little bit late getting to Gone with the Wind, since it is nearly 100 years old (lol), but I like to take on a longer book during the summer. Well, this one certainly met that goal, checking in at over 1,000 pages. When I started this book, which was a couple months ago, I also did not anticipate a historical social justice movement taking place at the same time which made me read this book differently than I most likely would have otherwise (during my reading it was also reported that HBO stated it would no longer show Gone with the Wind movie).
So, related to the note above, I want to get out of the way quickly - this book is incredibly racist, sexist, and very dated (there was also a part where Scarlett is basically raped and seems to offer enjoyment for the assault). It was hard to even read various parts and realize just how different a time it was during the setting of this book, the Civil War/Reconstruction, and even when it was written in 1936. While I tried to really engage with the story, it was impossible to not juxtapose the current inequality and systematic racism and white supremacy that exists in the US with what was going on during the writing and setting of this novel.
As for the book, I can see why it's a classic and beloved story. While so much of the setting and actions are dated and not connected to any part of modern life. The themes of love, hope, survival, etc. are certainly easy to connect with. Of course, I know of Scarlett O'Hara and Rhett Butler but really appreciate learning more about each of them and who they truly were.
Ultimately, I found the novel very engaging, which is why it earned a high rating of 4 stars, but I don't particularly enjoy how the story ended up or Scarlett. Truthfully, I found her awful, selfish, and totally self absorbed at every other characters expense. When Rhett offers the famous line, "Frankly my dear, I don't give a damn," I strongly empathize with him. I too struggle to give a damn about her as a person. However, she is the ultimate survivor who will allow nothing in her way to continue to move forward and succeed.
As everyone is probably aware of this novel, it's hard to recommend to people but I would say if you have not read it by now, have some time, and are okay getting pretty shaken up by overt racism of this time period, it may be worth the read. 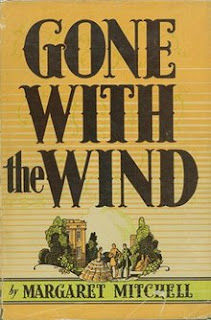