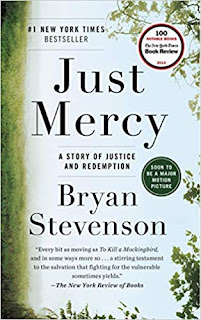 I've had Stevenson's Just Mercy on my "to read" list for a while now, ever since I saw him speak a few years ago in Baltimore. Part of the reason I've waited is I knew it would take some extra emotional energy to read the book and be wiling to deal with the many challenges and problems with our judicial and penal systems. While it certainly wore me down, I'm happy I spent the energy taking on this incredible story.

As it's now been made into a major motion picture, I assume most readers know the story. Stevenson, an awesome lawyer, goes to the Deep South and works to get many either falsely accused or incorrectly punished individuals off of death row and/or out of prison. While there are many anecdotes and cases, much of this book focuses on Walter McMilian, a young, black man sentenced to death for a crime he did not commit.

Stevenson is as gifted as a writer as he must be as a lawyer because the book was a pleasure to read. His use of effusive and colorful language helps paint the picture of darkness of prison and beauty of his subjects in a glorious way.  He also does a superb job of helping the reader understand the systemic challenges and problems of our judicial system.

Though this is why I had to give the book only 4 stars. The story is incredible and its as important a book that I have ever reviewed, but, I often really did not look forward to reading it. Rather, I often dreaded the thought of picking it back up to read about another racist decision made, another intentional structural decision that hurts a person with less social standing, or another time an innocent or traumatized person was unfairly treated. Honestly, it was hard to read about these injustices page after page. But, that is of course the point and value of Stevenson's stories - these untold stories need to be shared with the world. There is far too much unfairness and hate within our judicial system, and frankly, our society. However, as Stevenson argues, that can change. People still have options and the more we're all aware of ways we can help others, the better we can do in offering mercy and care for those who need it across our country.
Posted by droth8um at 5:15 PM