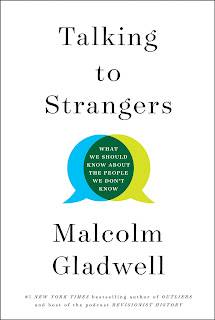 Well, I'm a huge fan of Malcolm Gladwell and was very excited to read his new book, Talking to Strangers. I've read all of Gladwell's books and reviewed a few of them here. While I think Tipping Point and Blink were simply incredible, I do feel like his last few efforts were not as strong. Perhaps others feel this way too. Besides not getting a lot of press, this book also was sold at a steep discount (only $6) a few months after it came out. So was it worth the money and time?

Short answer - absolutely! I'd read pretty much anything by Gladwell, as he has a gift for both storytelling and explaining creative ideas. The latter in this case, included the premise that people are inherently quite awful at understanding strangers and believing them. Basically, humans are built for connection and wanting to understand others and, thus, will always default to the assumption of truth even if there many pieces of contrary evidence put in front of them.

Like usual, the book was most interesting, and moved along smoothly, with Gladwell's great ability to share short stories and anecdotes to support his argument. This book included fascinating entries about why World War 2 got going because people didn't convince themselves Hitler may be a liar, the guy who realized Bernie Madoff was running a ponzi scheme about a decade before the SEC, and his biggest and most clear question - why did Sandra Bland end up killing herself after an unnecessary traffic stop (hint - the police officer was trained with very poor tools).

Overall, the book is a pretty strong read. As I described above - pretty interesting premise and great stories along the way. However, I did find Gladwell struggled to really support his premise and pull it all together. While each and every anecdote is interesting, I did not find they always supported and helped to clarify his overall premise. With his stronger, previous texts I found he made his points abundantly clear; here, he struggled to pull the strands fully together.

Still, it's Gladwell and it's better than 98% of the books out there. It's entertaining, the premise is captivating, and it's relevant to the current world and our lives.
Posted by droth8um at 8:38 AM