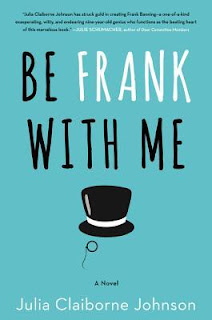 Be Frank with Me was not on my radar but it was passed on to me, and it was an interesting read about an incredibly ECCENTRIC young boy named Frank who was the star of this story.

Not having heard of this book, I was intrigued by it's general plot: young employee at a book publishing group is assigned to support one of it's strongest and reclusive authors who needs to finish her second book after she rose to stardom with her debut novel. As I mentioned above, what turned out to be the most pleasant of surprises was the character of Frank - the reclusive authors 8 year old son who, to say the least, is incredibly eccentric. The book goes on as the young employee shares her experiences living with this unique family and the trials and tribulations of the amazing charismatic, challenging, and bizarre - Frank.

The book read easily and there was a lot of interesting dialogue and great interactions between the key characters. The first half of the book was my favorite as it included wonderful vignettes from Frank's life that included all of his exuberance and oddities at it's best. He really was the best character in the story and most scenes without him were boring and kept me missing him.

I found the second half less exciting. Unlike the first half that just told short anecdotes, that really didn't move the plot forward. The last half of the book tried to tell the story of Frank's mother (a Harper Lee) type. I supposed this was necessary to assure the plot "moved" somewhere, but it just wasn't exciting or that interesting to hear about the narrator's quasi-love story, Frank's mom struggle to write, or the book publishing editor coming to rescue things.

If you want to read a humorous book about one of the most eccentric, funny and charming young kids you could imagine, this book is for you. It's hard not to love Frank (especially since he's fictional and does not live with you!).