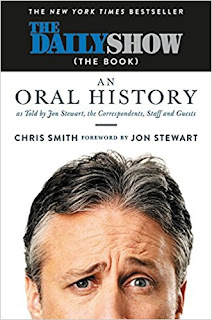 Like many college educated liberals in their mid-30s, I was a HUGE fan of Jon Stewart's Daily Show. I remember falling in love with it during George W.'s presidency and enjoying it further during Barack's eight years (sad to say I didn't even give Trevor Noah a chance when Stewart quit two years ago (though John Oliver's show in HBO is fantastic!)). So, it seemed like a no brainer to check out a very complete and comprehensive history of the show.

What was cool about The Daily Show (the book) an Oral History as it's simply interview after interview, spliced together, from everyone who was a big part of this show. Of course, Jon Stewart is a big part, so are the producers, writers, directors and correspondents on the show (John Oliver, Stephen Colbert/Carrell, Jessica Williams, Lewis Black, etc.). The book is a fun and easy read. While Chris Smith, includes some small notes throughout, he does an incredible job of taking these individual interviews with each person and include small chunks, sometimes only sentences or paragraphs, one after another to tell the history of the show. And it really is comprehensive; he starts from the days when Stewart took over for Craig Kilborne all the way through Trevor Noah taking the reins.

For the most part, the book is what you might imagine. Them going through the history of the show and the various individuals interviewed providing their memories of various events and shows throughout the years. For the most part, its an enjoyable read. I forgot about many of their shows and the comedians interviewed are just as funny when talking about the show as they were on the show. I even pulled up YouTube to check out some clips I had forgotten about over the year (like his "fights" with Bill O'Reilly or Jim Cramer).

What I liked most about the book were two things. First, the nostalgia I felt about those past years and the joy I had watching the show. I loved how Stewart always was willing to comment and make a point about things in society and the world that he thought needed to be questioned or discussed. The show was great at making people laugh but always having a point in doing so. Second, and more surprisingly, I learned a lot about Stewart and what kind of person he is. Besides brilliant and funny, he proved to be incredibly caring, for those that worked for him, and for those that need to be supported.  He also always striving for excellence. This meant working hard, very hard in pursuit of trying to master something that he considered to be most important: Truth. I admire Stewart even more after the book and I would bet you would as well if you check out this interesting book.
Posted by droth8um at 3:49 PM