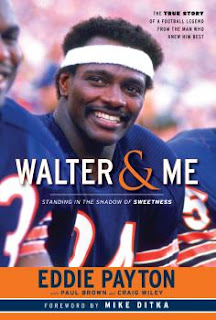 This won't be one of the longer reviews for a couple reasons. First, this book is mostly going to interest Bears fans. Second, it's a biography and not a ton to say about it.

Walter and Me is a biography/autobiography written by Walter Payton's brother Eddie Payton. If you don't know who Walter Payton is, you should.  He may be the greatest running back of all time (football, folks!). He was also my favorite player for most of my youth. This was due to two reasons. First, he was on the Bears famous '85 championship team which won the Superbowl when I was 5. The team was awesome and included Walter, the Fridge, Jim McMahon, and a few other interesting characters. Second, I loved the video game Tecmo Bowl on the original Nintendo. This was mostly due to the Bears being the best team and Payton the best player on the game.

As for the book, it's okay. While I got a few new insights into Walter, most of the book was really his brother's viewpoint on their lives. While I appreciated the early chapters learning about their lives growing up in poor, rural Mississippi, the subsequent chapters about his life were less interesting. Getting glimpses into his personal life (e.g. he is a huge practical joker, he is very introverted) was interesting, but it seemed like Eddie was more interested correcting misinterpretations about Walter than anything else.

As you may or may not know, Walter was only 45 years old when he died in 1999. He had a tremendous life and great career. One of my favorite memories was when my dad returned from a trip and gave me an autograph from Walter. He happened to see him on a plane and Walter, like many described, was very giving of his time, chatting with my dad until they were ready to take off. He truly was a great individual and amazing football player and if you revere him as much as I do, this book is for you. If not, you may want to skip this read though you should take a minute to check out the incomparable Superbowl Shuffle (Walter is #34!).