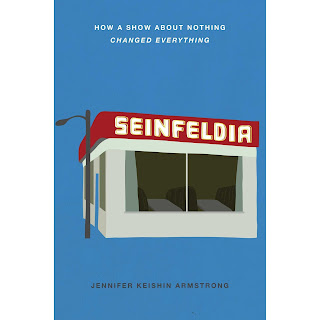 I think we can all agree that Seinfeld is either the greatest comedy of all time or among the best. The show's legacy still makes it mark nearly two decades hence and watching reruns are nearly as enjoyable as seeing it for the first time. There is truly nothing else quite like it. So, one would think that a retrospective, titled Seinfledia, would be as awesome as the show. Sadly, not even close.

I was very excited to read this book as you could probably tell from above. And it's not a terrible book; it's just not very good either. The book has some interesting anecdotes about how the show was created, back stories on many of the main characters and Larry David, and how the lure of Seinfeld still looms large in modern pop culture. I also enjoyed learning about many of the bit characters and writers from the show over the years (fun fact: almost every season they'd hire new writers. Basically, David would mine their lives for interesting stories (extra points if you were from NYC) and then dismiss them after they've used them up).

The real reason why the book was so lacking is because the author only interviewed or talked to people that were on the periphery of the show. This means neither David, Jerry, Elaine, George or Kramer had anything to do with the book. Certainly, they would be the most interesting and useful people to talk to in doing a book on Seinfeld. She did interview the soup nazi, and the guy Kramer is based on, and other people like that, but you could imagine the lack of insight without any of the core being part of the book.

Overall, I really can't recommend this book save you are an absolute Seinfeld nut.  You most certainly will get some nugget out of it and learn something new about the show. However, I think your time would be better spent just enjoying re-runs and waiting from a more comprehensive account to come out.
Posted by droth8um at 2:22 PM