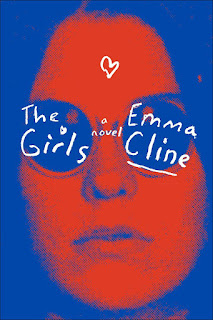 As some of you know who have read my blog, I love a good mystery and especially have enjoyed these female led, sort of crazy stories, that started with Gone Girl.  I sort of liked Flynn's other book, and very much enjoyed the knock off, The Girl on the Train. Joining the same ilk as those books is Cline's, The Girls. Although a bit different set up and plot, same storyline -- some people are crazy!

So this one is about a girl growing up in the late 60's in the Bay Area of California. Like, seemingly every book now, it does the jumping back and forth thing where the main character is now much older and is living her life while reflecting back to  many years ago. The crazy part: she was, more or less in a Charles Manson like cult one summer. And that summer, the cult did something bad...read the book to find out more!

In general, I found this book very entertaining and enjoyable to read. First, it's a very good plot and very interesting story. There was never a dull moment and once one strand of time seemed like it was getting a bit boring, the author would switch to the other. Also, impressively, the book maintained your interest without any real fireworks. Unlike that drunk girl on the train, this book was pretty even keeled throughout. Second, I really enjoyed the main character. Cline does a fantastic job of really making you feel the angst and apprehension of this young teen girl struggling with her parent's divorce and how to fit in socially. The allure of the cult seemed perfectlwhen considered in the context of the other parts of her life. Three, the book does a fairly nice job of making you feel what life was like in the late 60s. While not overtly part of the plot, the author does a fantastic job of making you really get into the setting. Finally, the book is, in many ways, a mystery novel. While it's not quite a 'whodunnit', and you more or less know what's going to happen, the author increases the excitement about events as the book moves on.

Of course, there are areas this novel could improve. While I did like the pace in general, there are parts were it gets to slow.  There are some parts where there seems to be a monotony to the chapters and it almost seems like the same events are going on again and again. I also felt the "future" character was a bit underdeveloped and did not really get a sense how the events in her past really affected her. While the author did a very nice of explaining and, having the reader feel what her life was like now, I was surprised there wasn't more connection between the earlier parts of her life and where she was in the present.

In general, I think The Girls is a real good read and fits in well to the genre I described at the start. If you like that type of book, you'd probably enjoy this as well. I do think that this book also could appeal to other readers as well. It's a very well written book, and the first Cline has penned, I believe. I suggest giving her a shot.