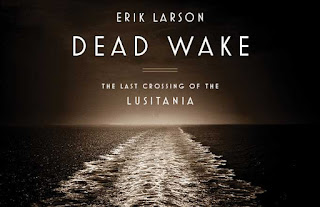 The Lusitania.  What do you know about it?  Nothing?  It's a boat?  Something about World War I or II?  It got the U.S. into World War I?  Well, if you weren't sure about some of those questions, it's probably worth taking the time to pick up Erik Larson's new fascinating novel titled Dead Wake.

Dead Wake is a fun book as it reads like a piece of fiction but every part of it is highly researched and accurate historically.  You really should read the book to learn more about, but to whet your appetite, know that the Lusitania was a giant cruise ship that sailed in 1915 between England the U.S. and was very similar to the Titanic.  It was indeed sunk and eventually (though not immediately as many people believe) led to the U.S. joining to fight in World War II.

So that is a very short description of the book but the story is so much more than that.  It's a story of people; individuals that played decisive parts in others lives and the movement of history.  The book is told in short snippets from a few different directions.  There is the Lusitania captain who is in change of this massive floating city.  There is the German submarine captain off the coasts of England.  Then, there are the numerous individuals that are riding the Lusitania.  Family members, rich businessmen, etc. who we learn more about on their voyage.

Okay, enough about plot.  Why should you read the book?  Because it's a fascinating story.  The author does an amazing job going back about a century and reviewing a ton of materials to create this wonderful tale for the reader.  By the end of the book, you really have a good sense of the different individual characters in the book and what motivates them.  And, because it is such a fascinating story, as good as any fictional novel, you can't help but feel connected with book.

Are there any downsides?  Yes, a few.  The book is slow from time to time and drags along a bit.  Some details are a bit to needless and, while perhaps the author finds them interesting, I found they did not actually add to the story.  The story is also quite sad.  I mean, you know what you are getting into when you start reading it but when you get to the end and find out what happens to all these people you've now connected with, it's kind of tough to hear.

So, do yourself a favor and pick up this interesting piece of history.  It tells of a time that is quite different from today and a world with different people with different interest and lives but it certainly is quite interesting and will, no doubt, hold your attention.  Enjoy!
Posted by droth8um at 9:37 AM