The Upside of Irrationality: The Unexpected Benefits of Defying Logic at Work and at Home -- Dan Ariely ------------- 2 Stars 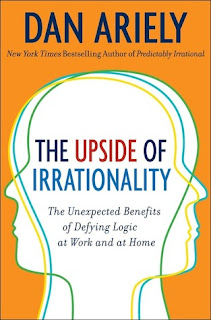 The Upside of Irrationality is basically a sequel to Ariely's first book, Predictably Irrational, which I reviewed kindly.    I don't know what happened with this follow-up.  Perhaps it was me?  I read the first book nearly five years ago when behavioral economics and thought was a new concept to me.  Now I am a grizzled veteran of behavioral economics and perhaps I expect a bit more.  Or, perhaps this book was just not very good.

So, the basic premise of the book is that people should think more about making irrational choices.  He also argues that we often are making what we believe to be smart, logical choices that actually are not in our best interest.  Some of the questions he goes into include: why don't bonuses work in jobs? why people like revenge? why we value things we make so much?   The book also goes into interesting subjects like online dating and emotions.

For me, the premise of the book sounded great and I loved the idea of thinking about our daily lives differently.  The big problem with the book, however, is that it just did not deliver.  I am not sure I have any idea after finishing it what exactly the 'upside' is to the irrational choices we are making.  I guess one might have a better sense of how to evaluate and think about one's actions but I mostly left bored and confused.

I think the biggest problem with the book is that the specific experiments and stories Ariely uses to make his points just simply were not as interesting as either his last book or some of the more interesting texts from authors like Malcolm Gladwell.  In addition, he took way too long explaining the experiments, going into depth about each specific part of the experiment, etc.  Then, the conclusions of many of the experiments were pretty obvious.  Like the idea that we value things more when we have a history or personal connection to them.  I didn't need to read dozens pages of completed experiments to know that was true.  Yes, understanding that and making shifts in ones life knowing about it might be good but to have to read about a boring experiment only to get to a fairly obvious conclusion is not my idea of a good book.  In fact, I would often skim the breakdown of the experiment (which I usually find most interpreting in books like this and the bulk of the book) just to get to the conclusion but the point made was often so minimal or obvious that it became frustrating.

In general, this book has still got a few interesting chapters and ideas to present.  However, Ariely's writing style, although informal and familiar, is a bit too simple for one to get excited about.  And unlike his last book, the take-aways are not nearly as exciting.   While some people may find this book interesting, I would take a pass if I were you and trust that most of your logic is pretty sound to begin with.
Posted by droth8um at 2:49 PM