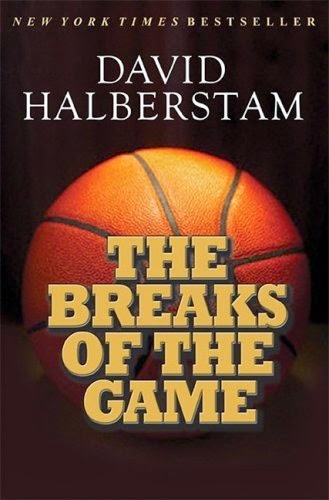 David Halberstam's The Breaks of the Game, is by all accounts, an absolute classic about the growth of the National Basketball Association.  Written over 30 years ago, I had heard about it being a 'phenomenal' book on many occasions.  Well, it was about time I gave it a spin to see what I thought.

What I did I think about it?  I'm still grappling with that question a little bit.  I know it was a fairly long book that seemed to be written with no real organization.  Although my Kindle said it was only 270 pages, the pages must be gigantic or have very large print.  It would take me many minutes just to finish a page.  Also, it seemed to just wander along going from one story to the next with no real organization or strategy to the order.  The backdrop behind all of it is the study of the Portland Trailblazers the year after they won the NBA championship with a great team led by Bill Walton.  That was about the only structure that existed.  I think it only had 4 chapters in the entire book and one of the chapters was about 200 pages by itself with no real demarcations from one subject to the next.  So, it was a bit hard to read.

I also did not love Halberstam's writing style.  I know he has been named one of the great writers of this generation, but I found his style frustrating as it would go from being short, succinct and somewhat informal to longer passages with a formalized structure that was not as appealing.  He also struggled to really grab me, as the reader, on many occasions.  I am not sure if it was because the stories were so dated or just, perhaps, boring and uninteresting, but it was a major problem of the book.  Also frustrating was the quite obvious lack of basketball information.  Make no mistake, this book is about a time period, really, society, entering the 1980s and how that had changed, especially socially, in the past 10 years.  All that is great and fairly interesting, but if you notice above, their is a giant picture of a basketball; kind of what I was hoping to read about.

But there was good stuff.  It's still a pretty fascinating portrayal, and as far as I can tell, incredibly accurate portrayal of what this nascent NBA was all about.  The story lines about Bill Walton, some of the other players, and the Trailblazers management was truly fascinating.  When Halberstam did take a few stanzas to describe basketball being played, it was quite lovely.  In fact, his descriptions of Walton and his true love of the game when it's being played at its best, was beautiful.  It truly can be a beautiful team game.  Also great was getting to really understand how much basketball is a profession at that level and not the joy that many people think it to be.  It's a grind, and in those days, it was a really hard grind as the money was just not great (many of the smarter athletes didn't even go to the NBA as it was a financial loss).

Overall, I do suggest reading this book if you want to truly have a consummate look at what society is like as the 1970s end and '80s begin.  The backdrop will be a small basketball team from the Pacific Northwest, but the stories told are examples from across the country.  Just know that it will take some real investment to stay connected with the text as you go through it.
Posted by droth8um at 8:29 PM