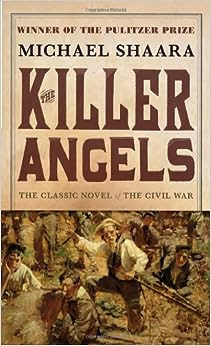 So, there is this old saying NBC had going for a while, "It's new to you."  I think it was a way to promote and market people watching repeats of television shows.  You know, if you have not seen something before, even if it's old, it's new to you.  This make sense.  I am watching the old Friday Night Lights TV series right now (btw, fantastic!) and all of it is new to me.  All of this is a long way of saying that when I recently read Michael's Shaara's classic, Pulitzer Prize winning novel from 1987, Killer Angels, it was new to me, and it read as well I could have imagined if I picked it up when it came out.

Basically, its historical fiction for the three days of the Battle of Gettysburg.  What is so cool about the book, though, is that Shaara takes each of the major generals, Lee, Chamberlain, Longstreet, Pickett, etc., and creates dialogue and scenes to mimic the action that occur during this pivotal battle.

I waited on reading this book for a little while after getting it as I was not convinced that I would enjoy it.  I am not a big fan of historical fiction, in general, and am even less of a fan of any sort of books that detail war and events of battles.  As such, I was pretty wary about reading a book about the 3 days of the very bloody Gettysburg battle.  But I was so very pleased with what I got.

While this book is definitely about battles and includes a fair number of descriptions about the fighting, the book is really a story about people.  Sure, the lens is the Civil War, but this book's description, dialogue, and expression of people's thoughts really is incredible.  I loved the descriptions of each main character at the start, discussions that occur throughout the days while the battles are going, and incredible connections made between the characters and the reader.  As a history teacher, this book truly helped me better understand and empathize with these soldiers but also, to more easily identify with the challenges of war through individuals.

I really recommend this book for nearly all readers.  It's a great story, historically accurate (including plenty of maps), and is really a wonderful portrait piece about these different characters.  Have no fear, this is not a book that glorifies battle in anyway, but does give you really good understanding of what some of the most critical soldiers thought during America's own Civil War.  If that doesn't convince you, remember, it won the Pulitzer Prize, and if you haven't read it before, it will definitely be "new to you".