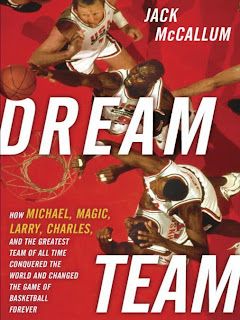 I don't really have a lot to write about today.  Partly it's because school starts very soon and time is not nearly as plentiful as it is earlier in the summer, and the book Dream Team by Jack McCallum really does not inspire me to write a great deal.

The book, as you can probably guess from title and cover picture, is about the 1992 Dream Team that won gold in basketball in Barcelona.  I love basketball and I loved this team (back at the ripe old age of 12) at the time so I thought this book would bring back great memories, have great insights, and be a real page turner... it was all of those things but only in some very small quantaties.

The good --
It's an easy read and I breezed through in about a week
It did have some great insights about how the team was originally created (sorry, Isiah Thomas), how they interacted with each other, and what life was like for some of the greatest players to ever play the game
The best part were the stories about the guys and their personal lives that I was never aware (a few: Stockton was so unrecognizable he would walk around Spain asking people about himself, Barkely would go out all night, Jordan was obsessed with beating everyone at everything, Laetner's best ability might be his ping pong skills (he beat Jordan)).  There were a few others about a great scrimmage within the squad a well.

The bad --
You just got most of the highlights above... I mean obviously there is more but I really felt like I was reading a book that could have been condensed to about 100 pages from 300.
It became really annoying how often the author had to talk about himself.  I assume Jack McCallum has been around for a while and is some big shot for SI, but does every chapter have to include some reference to his own part in this?  Jeez.
Much of the book I was already aware of or knew about so it was a bit repetitive for me
I didn't love his style of writing.  Although easy to read it was told in a very boiler plate kind of way and had little excitement.


So, overall, I would pick this up if you are a die hard b-ball fan or love the Dream Team otherwise I would avoid.  While a few of the nuggets from this made the press (i.e. Isiah was left off cause MJ didn't want him), you can just check the old news and learn that stuff.