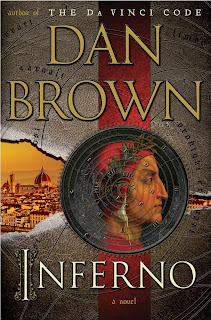 On occasion, I read a book and I really want to give it a better rating but usually it lacks excitement or 'entertainment value' and I do not.  As I have been doing since the start, I tend to do my ratings based on how entertaining the book is.  In the case of Dan Brown's Inferno, it's the opposite.  This is a book that should have received a lower rating for a variety of reasons, but wouldn't you know, it was a really fun, interesting read that I felt obligated to give a decent rating.

Unless you've been living under a rock for the past 10 years, you probably read/saw/or heard about Dan Brown's The Da Vinci Code.  It was a great, repeat, GREAT book.  Inferno was not, repeat, NOT a great book... it wasn't even a good book.  I am not sure what happened; it's hard to tell how much is the book and how much is me.  A really similar thing happened a few years ago when I read a John Grisham book for the first time in a while.  It was called The Appeal and the review is here, but bottom line is, things that seem really cool when you are younger, aren't as cool nowadays.  As a case in point, Dan Brown's Da Vinci Code was soooo cool.  It was interesting, and educational, and fun, and seemed accurate in a good way while Inferno, while interesting, does not seem that educational, was not nearly as fun, and while possibly accurate, far less of usefulness and consequence.  Overall, just not nearly as good a book.

I guess it's just hard to NOT compare it to Da Vinci Code, but I probably shouldn't.  It still has Dan Brown's signature ability to captivate the reader at the ends of chapters to keep reading, puts fairly interesting main character Robert Langdon in fascinating positions, makes tons of connections to geographic history (this time it's Italy) and connects lots of what the 'bad guy' is doing to an ancient text (in this case Dante's Inferno).  Obviously, there is plenty to like and the constant action and continuous mystery of what will happen next is what makes this book as good as it is.... but...

But, you just don't care that much as you do in his other books.  It all seemed to unreal.  First, I found the connection to the Inferno not nearly as captivating as you know, the stuff about Jesus in the last book.  Second, the major point of this book is about population growth, besides being something that I don't find all that interesting and controversial, Dan Brown's rather obvious, 'I'll hit you over the head with what my views are' way of writing, bothered me to no end.  Third, the ending was fairly lame and really did not 'conclude' the story.  Fourth, although the mysteries that Langdon figures out are interesting, they seem like Brown is trying way too hard to make them cool.  In many ways, it was like Brown went out of his way to try to make another Da Vinci Code, just basing it in Italy and about Dante's Inferno.  The problem is you can't make another Da Vinci Code; I wonder if he would have had more luck just writing a great book that wasn't trying to be an obvious rip off of a former book.

So, you can probably tell I had some real issues with this book, but as I said before, it really is a nice, easy to read, fun novel that you can fly through and still find exciting and interesting.  But just don't be surprised when you get to the end and you think it's a very poor excuse and replication of the original Da Vinci Code.