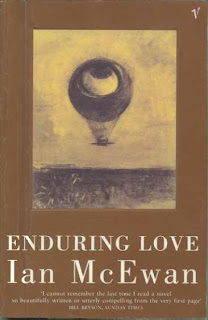 I don't think I can ever recall a prior time that I have finished a book and been so frustrated.  I mean, really annoyed.  But somehow that managed to occur after I finished reading Ian McEwan's Enduring Love.

I'll try to do my best to explain but first some background on the selection of text.  I was in love with Ian McEwan.  I read his best book, Atonement about two years ago (review here), and more recently, the pretty good Amsterdam.  So, I thought I'd give Enduring Love a try as it had decent reviews and many considered it a very strong book of his.

The premise sounded fairly interesting, a guy out with his girl about to have a picnic witnesses a 'runaway' balloon about to hit power lines and he, along with 3 others, all run to try to save it.  As they do, someone dies in the process but the major story line is a bizarre obsession another person starts with the main character that is pervasive throughout the rest of the novel.  Obviously, its gets dramatic, there is a major climax and typical resolution.

So, back to the frustration.  I am frustrated with many aspects.   First, the story starts out in a very weird way (as described above) and never really gets momentum.  It is an odd story and not much more.  Second, the actual plot is incredibly frustrating.  I mean, I know it's a story, but it was so ridiculous the way it played out and what people decided to do.  Third, the ending is frustrating.  In typical McEwan fashion there are twists and major surprises but unlike earlier novels, the twists don't add to the story, just to my FRUSTRATION!  Sorry, I am a bit annoyed if you can't tell.  Fourth, I might be frustrated with myself for not liking it more.  By all accounts, it is fairly well liked by others and it is very well written.  It's not boring per se, but it is slow for long parts.  It lacks dialogue which bothers me.  I did appreciate alot of the various points he was raising about god vs. science and the individual vs. the community and all that stuff.  So, some of the frustration was with myself as well.

Overall, I actually recommend this book to check out as I think it may have been my various frustrations that prevented the novel from getting a higher rating.  It's a fast read and short, has some beautiful writing and well detailed scenes, and has a fairly interesting plot with good twists at the end.  If you do decide to read and do not enjoy, please do not get frustrated with me; I certainly gave you plenty of other reasons to be annoyed.
Posted by droth8um at 7:38 PM