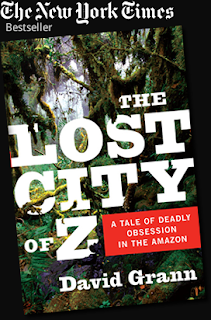 So, I am not a huge fan of explorers and even a lesser fan of South American history.  When I was told the premise of The Lost City of Z, I was a bit intrigued but, overall, I thought it sounded kind of like a dud.  Thanks to great ratings and some people saying they really liked it, I gave it a try... thankfully, I was not disappointed.

The Lost City of Z is a well told story about two related and paralleled stories told in conjunction with each other.  One is about a fascinating explorer named Perry Fawcett who explored the Amazon many, many times... he is pretty much a stud.  The other is about the author's quest to learn about what happened to Fawcett; this includes his eventual trek deep into the Amazon to find Fawcett... he is a writer (far from stud).

The book is really quite good for a number of reasons.  First, the author writes in a very accessible and enjoyable style.  Although much of the text is history laden and includes information from at least a century ago, he makes most of the book seem very exciting and interesting.  Certainly hearing about the dangers of entering and living in the Amazon is fascinating (it really is a pretty nasty place...some of the best parts of the book were hearing about how people were injured or died from some of the most creative animals/plants).  Second, the story is quite exhilarating. Fawcett basically goes to the Amazon dozens of times to try to find this amazing, and perhaps not real, Lost City of Z.  Sort of an El Dorado type of place, it is assumed that it will be incredible.  Third, the back and forth way of how he goes between his story of trying to find Fawcett (oh yeah, he never came back from an adventure and no one knows what happened to him... kind of a cool mystery) and also the original Fawcett story are juxtaposed nicely.  Overall, I really enjoyed going back and forth between the older story and the more modern one both about exploration, albeit about very different goals.

So, I would check this book out if you like adventure stories, anything South American/Amazon related, or if you want to read just a solidly well told story about exploration.  It's a pretty short book, easy read, and lots of fun.  Enjoy your own adventure when you get it!