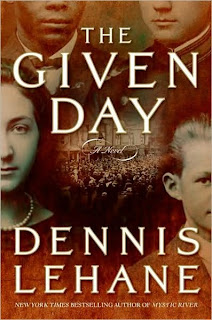 Well, it's sad to say that it's been almost 2 months since my last blog.  Between a 700 pager and the return to school, my reading time has been a bit limited.  But I am happy to say I finished the wonderful The Given Day based on a recommendation from the sis, and it did not disappoint.

If you are like me, you probably have heard of Lehane's other books as they became massive movies.  Gone Baby Gone, Shutter Island, and Mystic River all were major productions but they tended to be a bit 'darker' than The Given Day.  Quick synopsis: the novel is historical fiction and the stories are about two characters (1 black/1 white) with the backdrop of Boston in the mid 1910's and the impending and eventual police strike that occurred.  There's also some cool preludes and interludes about the life of Babe Ruth, and stories from his life that are occurring at the same time as the narrative.

In general, it's a very good book.  The writing is nice and crisp and a near perfect combination of details and 'picture painting' with interesting and worthwhile dialogue.  There is very little wasted information, scenes, or actions that occur in the book, and thus, the 700 pages are a pleasure to read.    The characters are nicely created and you can't help but begin to feel for them and root for the ones you like.

The biggest difficulty with the book is the arc of the story.  For certain periods in the book, you are not sure where it is going and there almost seemed to be no impending ending.  Indeed, there was a conclusion but I could not help feeling like many questions were still left unanswered and I was a bit perturbed.  That begin said, it's my understanding that there is a sequel to this that just came out in the last month that might answer some of those questions.  My only other real complaint is that this book, is in many ways, 'dark' and a bit sad.  There is racism, violence, terrorism, and an ending that does not exactly leave you jumping with joy.

I would still strongly recommend this book to all readers, especially those who like historical fiction.  I was excited to read that there is supposed to be a movie (at some point) coming out about this book and would love to see these characters that I pictured in my own mind on the big screen.   Do check this story out; you won't be disappointed!
Posted by droth8um at 12:51 PM