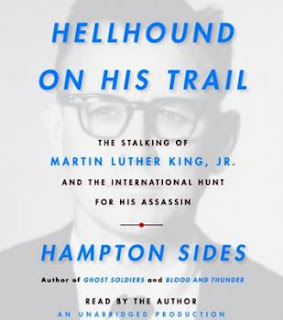 For the first time ever, I thought it prudent to do a review of two books at once.  There a couple of reasons.
1. Laziness. As it's summer, I'm reading books a bit more quickly than during the year and don't really have all that time to blog about them.  Doing two reviews at once is faster.  2.  They are very similar book (more about that later).  3.  I think it would be new and different to a double review... so here we go: 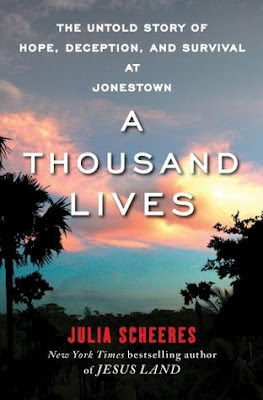 The first book I finished was an excellent true story by Hampton Sides titled Hellhound on His Trial, and it was basically the story of James Earl Ray's (nerdy looking dude to your right) stalking, assassination, and eventual escape of Martin Luther King, Jr.  The second book is called A Thousand Lives: The Untold Story of Hope, Deception, and Survival at Jonestown by Julia Scheeres.  Before I go through a brief explanation of each book, I wanted to explain how they are similar.  First, both are true stories based exclusively on facts.  Second, both are based on a significant amount of research done in the past few years from thousands of pages that were released by the FBI that had to do with MLK being killed and the Jonestown massacre.  It was abundantly clear both authors spent significant time combing through huge amounts of information to put together very well written 300 page books that tell a fascinating story.  Third, both are tragic.  Although one book talks about the tragedy of one person dying, and the other nearly 1,000, they both show how bad people can alter the lives of others significantly.

Overall, I enjoyed Hellhound more as a read.  It was a bit more exciting and fun to read about.  Although it's still about a fairly crazy guy in James Earl Ray, whose racist stupidity killed one of the great men of the 20th century, the story about Ray, which includes his initial interest in getting to King, actual assassination, and escape, are all very fascinating episodes.  Although the book starts a little slow detailing his adventures in Mexico and California before going to Memphis for the assassination, the book was nearly impossible to put down once the story turned to the carefully detailed and drawn explanation of the assassination outside of a Memphis motel to his amazing escape and runaway period.  In fact, the most startling thing I learned from the book was that it took almost two months to capture Ray and it was the most costly manhunt in U.S. history (over $2 million spent).  His escape also took him north into Canada, across the Atlantic to Portugal with his final arrest occurring as he was trying to leave London, England.  He then went back to prison and escaped again for a few days before finally being caught and kept in prison until he died about 20 years ago.  What a great story!

The second book about Jonestown was just as good as a page turner but seemed to me much more melancholy.  The book basically explains how Jim Jones created a very 'cult' like organization, led many of his followers to Guyana with him, became pretty crazy and eventually helped most people there complete the worst mass suicide in the history of the modern world.  Besides being an incredibly sad ending, most of what led up to it was not very peachy either and you could not help but became so upset and sad for the so many innocent people who either could not or would not leave Jonestown prior to the end.  Like Hellhound, this book does an incredible job using superb research to tell the very detailed story of 5 or 6 specific individuals that lived at Jonestown along with the life of Jim Jones himself.  Overall, it's a pretty tough story to get through but is a very exciting book to read.

Both of these stories are great reads, and I would recommend them to all readers, especially any that are interested in these subjects.  In both books I learned many new things that I was unaware of earlier and both stories were told in a fashion that they are a very easy read and hard to put down.  Realize that although both are depressing, they tell great stories about important events in the lives of Americans in the past 50 years. Enjoy!