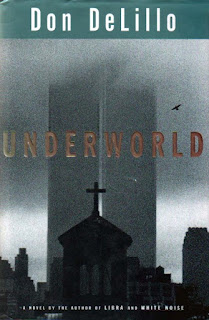 If you are like me, you have probably not heard of Don DeLillo's Underworld. Nonetheless, it is regarded by many as one of the best novels in the past 25 years.  Thus, I put it on my list of books to read, and, for the most part, I was not disappointed.

It's been kind of hard for me to get into modern or, as many call it, 'postmodern' novels.  Normally, the fiction I read is based on older ideas, issues, or themes so getting into modern fiction is kind of hard.  You know, current, real world stuff.  I struggled through Philip's Roth American Pastoral and this book reminded me of that in many ways, but, this was much better.

A little background:  This book is absolutely SPRAWLING.  Coming in at over 800 pages, this book features many characters, many places, and more importantly, many time periods.    The time period thing is what is really fascinating about the book.  The book starts in the 50's, speeds up to the 90's that jumps back through the 70s and 80s and finishes again with the 50s.   It's pretty crazy.  What's even harder to keep up with about it is that there is random focuses on different characters, often in non-sequential order throughout the novel.

I consider the novel 'modern', as the book is really about just about people and their lives.  A lot if it is about how little things and decisions changes other big things (sort of butterfly effect).  It's also a lot about circumstance, environment, and location of upbringing and how that changes people.  It's also a little bit about baseball.

The book is great because it creates interesting, though not very deep, characters.  It's most great though because of the asynchronous order of the chapters.  It is written very well and DeLillo has a real talent for painting pictures of each scene.  While you don't really fall in love with any characters (I'd have to think more about it, but I think each is flawed), the story and the circumstances around their lives is fascinating.  It's also great because it is about current life.  Whether it be Cold War references, racism issues, adultery, or other items, the book is expressly set in the past half century.

The book's biggest drawback is it's length. Some, or alot, could have been cut, and some additions of chapters about less than important characters could have been skipped.   Had it been edited down to a crisper novel, it would have not taken away much from the story and made it a tighter and easier read.

Overall, it's a very good book.  The Prologue is a wonderfully crafted short story that relates Bobby Thompson's 'Shot heard round the world' that will pull you right into the middle of one of the critical pieces of the entire story.  If you don't mind reading through the superfluous narratives, you'll get a real treat by sticking it through to the end of the story.
Posted by droth8um at 2:48 PM