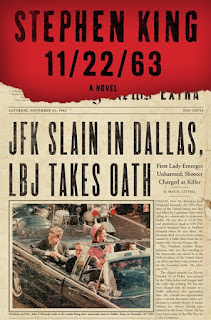 As I was reading Stephen King's amazing new novel 11/22/63, I knew from about 50 pages in that this would be approaching a 5 star book. As I continued reading, I kept going back in my head about whether it was truly a 5 star novel. I really wanted it to be one (they are pretty rare on this blog), but in the end, I just couldn't do it.

There have only been three 5 star books I have blogged about. All are amazing and they include Steinbeck's East of Eden, Puzo's The Godfather, and Follett's Pillars of the Earth. This book was definitely in their league, and I would argue, was perhaps a more enjoyable and addicting read than those books but to get 5 stars it has to be epic. Alas, that is where this fell a little short.

Quick synopsis about the book that gives nothing a way: it's about this guy who finds a way to time travel, thinks best to help the country by going back to 1963 and stopping the Kennedy assassination. That's about all you need to know to get started. Perhaps what's most exciting about the book is how quickly it does begin. So many novels slowly set up the setting or describe characters but about 20 pages into this novel the time traveling already starts. I absolutely loved the start of this book.

That was one of the reasons I new quickly that I would be debating whether this was a 4.5 or 5 star novel... it was such a page turner. After a dynamite start, I had trouble putting it down for the three weeks it took for me to plow through the 850 pages. Like other Stephen King books, it could have used some trimming. The middle had some parts that got a bit long and did not contribute a great deal to the plot. The book also was a bit simplistic in writing style and at no point did I find myself impressed with any of King's language or intricate writing elements. One of the concerns that I had early was that the idea of time travel can be so 'cheesy' sometimes, but the way King presents is so matter of fact and with so little fluff, that you can't help but go with and say to yourself 'okay, I'll just suspend some disbelief for a while'.

What was impressive was just the unbelievable storytelling power King possesses. As I give ratings mostly on entertainment value, this book knocked it out. As I said earlier, you get hooked in the first few pages and are with the main character throughout. I also love dialogue when I read, and this was chock full of conversations and fun back and forth. It's also written so simply that it's an incredibly easy novel to get through and one that does not take a lot of work to read.

As I mentioned earlier, the only real weakness of the novel is a slow middle section but due to such a strong start you find yourself happily reading through some duller parts waiting for the action to start again...and there is plenty of action too. I would like to write more about the actual plot because I loved the actual elements of the story, the characters, the description and time spent in the 1950s and 1960s and the wonderful ending. However, I don't want to give anything away. I knew just what I gave as a synopsis earlier and that left plenty for my imagination to go wild as I went through the story. As it was, there were so many ways that it could have worked out and part of the fun was trying to guess what might happen.

I strongly recommend this book to all readers and would argue that it's as close as can be to getting a 5. I really would pick it up as soon as possible though I warn you it's going to be hard to do other things once you get started, you are not going to want to put it down.
Posted by droth8um at 5:54 PM