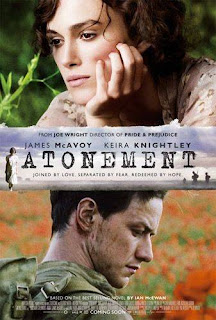 It was incredibly strange to read a great novel with a twist for an ending after already having seen the movie, but, in an unexpected but certainly welcome surprise, it ended up making the book ever better.

I saw the movie Atonement a couple of years ago. I was going in not expecting much, I mean it didn't sound like my type of flavor: English, love story, set 60 years ago... sounds like a recipe for disaster but, alas, it was pretty good. I mean not bad. Then on a whim last week, I thought I should maybe read the book Atonement as I had heard it was a pretty good novel, and I was fairly familiar with the story. Well, I was absolutely shocked by how good it was and how much I enjoyed it.

I really couldn't put it down and read it in a week, which is the most critical element when I review a book...is it captivating?. It was a truly remarkable and probably a perfect novel. The only thing that took a way a .5 star was that I personally just didn't like the ending (bad reason to lose a .5 star, but I write the blog).

I don't feel like there is any need to go through the plot as most people have seen the movie or know in general what it's about so I'd rather just continue to gush about how much I liked the novel. First, I love the way McEwan writes. His prose is just phenomenal and a joy to read. It's almost like poetry how well it flows. He also has a knack for using some fairly obtuse vocabulary, but it seemed liked every word he used actually fit the sentence or paragraph and was never forced. Second, the characters he created seemed so real. Perhaps it was because I had seen the movie and could better picture them but they were so cleanly and fully developed it added so much to the novel to really feel like I 'knew' these people. Third, the story is so intricately and delicately developed that it really is quite genius... truly nothing is overlooked. Fourth, and though I hate to say it, it's a really nice love story. Normally not something I really find that exciting, this one was told so well that but you can't help but love it.

Overall, it really is a perfect novel and one I would recommend wholeheartedly to anyone who has not yet read it (I am a little behind as it came out like 10 years ago). For me, what added to it's enjoyability was the fact that I quasi-remembered parts of it from seeing the movie a few years ago. I remembered just enough to know who the characters were and the basic novel twists but not enough detail where I found it repetitive. Quite the opposite, because I remembered just enough of the story, I better appreciated and enjoyed seeing how it was developed through the written word.

So, if you have the choice, I would say definitely read the book right now if you saw the movie a while ago. Or you could go the route of watching the movie right now and then waiting like 3 years to read it but that takes some real patience.... the choice is yours.
Posted by droth8um at 6:47 PM