My Life in France – Julia Child and Alex Prud'homme----- 3 STARS 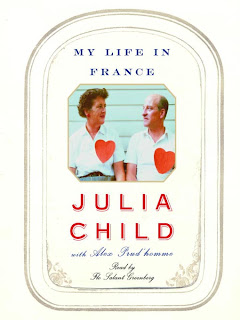 I recently had the pleasure of watching the very cute movie Julie and Julia. It's a very nice little movie and is the story about Julie (a writer/blogger) who redoes many of Julia Child's most famous recipes. She kind of bores me in the movie, but the scenes with Julia Child (played by the timeless Meryl Streep) were excellent. In fact, I was so intrigued and taken by the whole idea of Julia Child that I knew I wanted to read something by her.

My Life in France is Julia Child's autobiography about her most formative years learning cooking in France from 1950 to the mid 1960s. If you don't know who Julia Child is, she is the person who basically made French cooking in America popular and also fashionable. Additionally, she was the one who started the idea of cooking TV shows. Although we all take the Food Network and others for granted, Julia Child was the first one to have a real show (The French Chef). Her shows were very popular and started in the mid-1960s and ran for 40 years.

As for the book, it is very nice and average but nothing astonishing. It was one of the few instances of reading where I got exactly what I expected. A story about her leaving her OSS job (yes, she was a spy...sort of) to learning the art of fine French cooking in France for a decade. The story illustrates her early learning with great French chefs, to eventually writing Mastering the Art of French Cooking (which made her famous), to a few other cookbooks through the late 1970s.

The book has got a nice tone to it but the organization is a but jumpy and seemingly random events and activities are mentioned with no real connection. One wonders how much she happened to just remember when writing the book that she felt obligated to include. She includes a great deal about meals created, food studied (she is the self-proclaimed expert on mayonnaise) and recipes detailed. Reading the book it would have been nice to have a working knowledge of French as most recipes she includes are in the native French. Although this does add authenticity, it also provides the reader with no clue what was made or eaten on certain nights (some you learn though; canard is duck, for instance).

In general, it's a very nice book about Julia's life, easy to read, and includes a number of great photographs by her husband Paul. I would highly recommend it to any fans or people specifically interested in Julia Child. It is still worth reading if you have any interest in French life or French food or if you a just a gourmand like me.
Posted by droth8um at 10:15 AM