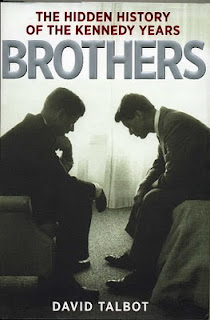 For my birthday, my kind sister-in-law and brother-in-law gave me the book Brothers. Since August, I have been waiting to get to it and finally was able to pick it up a few weeks ago. It didn't take long for me to fly through this exciting and investigative story about the Kennedy brothers.

Written by the founder of the investigative journalist site, Salon.com, David Talbot puts together and incredible and emotional book about the lives of JFK and RFK during the mid-to- late 1960s. The book starts with a detailed and harrowing retelling of JFK's assassination in Dallas before going backwards in time to 1960. Talbot then takes each of JFK's three years in office and writes a chapter on each. The book then concludes with RFK's story after JFK's death until he too meets his own untimely death in 1968.

This book was an absolute pleasure to read and was one of my favorite non-fiction books I have read in a long time. Talbot's style of writing was extremely exciting to read and incredibly easy to follow. Although this book is based entirely on written documents, historical findings and author interviews, it reads like a well crafted spy novel or murder mystery. My only complaint was that Talbot often seemed to be demonsrtating how MANY sources he talked with and there must be over 100 different people mentioned and referenced in the text which made it a bit hard to manage at some points.

The book was so enjoyable to me for a nubmer of reasons. First, I have had an obsession with JFK since a child. Earlier it was becuase of all the assissination lore, but after reading Talbot's book, it's more about him as a president. His aura, decision making abilities and courage were incredible, and I learned so many new details and stories about his life as president. Second, the book confirms and demonsrtates in lucid detail about the intrigue and undermining that was going on at the highest levels of government at this time. I was aware of the incredible difficulty JFK had with his Cabinet and other officials form the movie 13 Days (which is one of my all-time favorite movies if you can get past Costner's ludicrious Boston accent) but had no idea how much JFK and RFK had to fight, not only people in their own Cabinet, but members of the White House staff and nearly all higher-ups at the FBI and CIA. Third, this book was really a tribute to RFK, and I have never read and learned as much about the man as I did in this text; I am also now mildly obsessed with him. RFK was truly the MAN behind JFK. Although not nearly the social rascal and pretty boy as his brother, RFK was the heart and soul of the Kennedy family and was a bulldog in politics. After reading the book, it was quite obvious that once JFK died in '63, RFK died pretty much as well. It was almost as if he knew by '68 that he needed to be another martyr for the revolutionary cause (what revolutionary cause you say? Read the book to find out).

Anywho, I could write all day long about how much I enjoyed this book and continue explaining all the incredible parts of the JFK and RFK story. If you have any interest in either of the Kennedy brothers or in the state of our governments in the 1960s, please read this book. Both JFK and RFK were amazing people, and to read this story you can't help but feel an incredible sense of heroism about both men. It's incredible testament to both men's legacies and by reading it, if nothing else, you pay homage to two great Americans.

(Also, it really, really helps to be a slightly geeky Political Science major to get into it more).