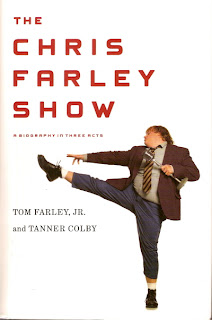 Recently I finished reading The Chris Farley Show: A Biography in Three Acts. The book was much as expected: a story about Chris Farley’s life from beginning to end told almost entirely through interviews with family, friends and associates. As I already kind of new the ending (he dies, sadly), the most interesting parts of the book was the first 3/4ths. A couple of thoughts about the book:

1. The one most obvious thing is that I had no idea how bad Farley’s addiction was and how much he used throughout his life. As he died when I was fairly young and innocent (oh the good old days), I never really understood quite how much of an issue drugs and alcohol were. As you learn about his life, however, it becomes strikingly clear how much a disease addiction can be. He used a massive amount of drugs and alcohol throughout his life and went to rehab an uncountable number of times. Parts of this book read like James Frey’s A Million Little Pieces (which is a wonderful book, even if it is part fiction).

2. On a related note, I found it kind of sad that much of the book seems to be people defending themselves and clearing their consciences about Farley’s death. So much of the final chapters were friends and family saying that there was nothing left to do and they were kind of waiting for it to happen. While I totally agree that addiction is a disease and that he was completely out of control, I think it’s ridiculous that some of the closest people around him threw up their hands and gave up. People beat diseases all the time. After the nth “normal” rehab place didn’t work, some should have said “Ok, that’s it we’re taking you to the desert island rehab in _______ and you stay there for a year”. I guess they couldn’t though….there was a lot of major father/son issues and basically his father would have never stood for it.

3. By far, the most enjoyable parts of the book were the anecdotes and stories about Chris’ good and funny times… which there were many. Basically, since 9 years old he was a star and whatever he did and wherever he was he provided joy and laughter. This to me is the true beauty of Chris Farley. I, like most people, fell in love with him on SNL and then in Tommy Boy. He provided some amazing characters on SNL including the motivational speaker, Bennett Brower, and one of the SuperFans (as a Bears fan, the SuperFans skits I enjoy even more).

4. What was most interesting to learn about Chris Farley was that he was simply this incredibly down-to-earth and normal guy. One of his most famous skits is simply called “The Chris Farley Show”. Here, he basically interviews famous people and acts astounded to be around them and often says “you remember _____? That was awesome” Apparently, that’s really just him being himself. He just loved making people laugh and providing happiness.

Overall, the book is much as expected for a biography. It has some really great stories, a lot of detail about his drugs and alcohol abuse, and a few laughs along the way. It received 3 stars and is recommended for any fan of Chris Farley out there.